Wed, 01/29/2020 - 1:17pm
By Lynn Bartels
againlynn@gmail.com
“With the process of elections being under major scrutiny, we will continue to have concerns and do our best to be proactive. “ ~ Dolores County Clerk, Lana Hancock

Running two elections is always a challenge for Colorado’s county clerks, but this year they’ll  operating a third one, the presidential primary.

Trying to find enough people to work for the presidential primary in March, the primary in June and the general in November -- during a tight job market -- was one of the issues discussed at the Colorado County Clerks Association’s three-day winter conference in Colorado Springs.

Clerks and their staffers turned out in record numbers for the conference,  attending workshops dealing with their varied duties, including motor vehicle registrations and document recording, all requiring delivering customer service.

“Any and all information and knowledge we receive at these trainings are valuable in helping us feel confident in running three elections this year,”  she said.

“With the process of elections being under major scrutiny, we will continue to have concerns and do our best to be proactive. “ 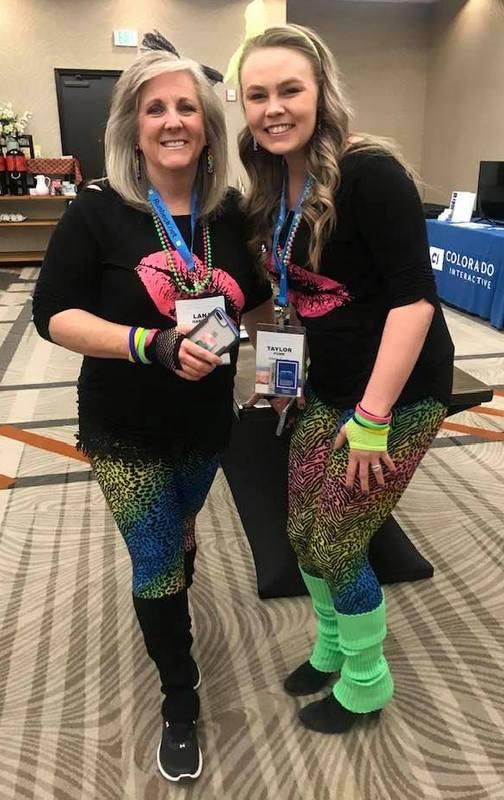 The conference ended Jan. 22 with a day-long election security exercise, Election Preparedness for Infrastructure and Cybersecurity or EPIC. It was hosted by Secretary of State Jena Griswold, and intended to prepare county clerks and other election officials with various worst-case scenarios that could potentially impact the election process.

Hancock said the EPIC exercise was one of the highlights of the conference, along with networking with other clerks and talking one-on-one to vendors.

Each clerks conference has a theme and this time it was “Back to the Future.” During the banquet, when clerks and their staffs finally have a chance to let loose, a number dressed in ‘80s garb.  Scrunchies held up their hair. They donned leg warmers.

The ‘80s were a different time. Colorado’s population at the start of the decade was 2.9 million. Eligible voters participated on Election Day at polling places.

Colorado now has 5.7 million people. Neighborhood polling places are gone, replaced by a mail-ballot system and vote centers.  Voters can start voting 22 days before an election, and they can also register to vote on Election Day.

One thing hasn’t changed. The path to democracy still leads right to your county clerk’s door.

Lynn Bartels was a reporter for 35 years, including for The Denver Post and the Rocky Mountain News, before serving as the spokeswoman for Secretary of State Wayne Williams. She now does communications consulting; one of her clients is the Colorado County Clerks Association. She also writes a weekly column for Colorado Politics, and some of the material in this story also appeared in her column.
Subscribe and see the e-Edition of the Dove Creek Press for the complete story.