Tue, 02/19/2019 - 4:34pm
1941 - 2019
Jenkins-Soffe South Valley
jssv@jenkins-soffe.com
A memorial service in honor and celebration of Claudene’s mortal journey will be held on Monday, 25 February, 11:00am, at the LDS Church. The first viewing will be Sunday, 24 February (5-7pm) at Jenkins-Soffe Funeral Home, and a final viewing at 9:30-10:30am at the aforementioned LDS Church. The interment will take place on Tuesday, 26 February, 1:00pm, at the Dove Creek Cemetery, Dove Creek, Colorado. Online condolences at www.jenkins-soffe.com 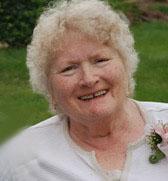 Our dearly beloved wife, mother, sister, grandmother, etc. – Wilma Claudene Fabiano (nee Ivie) - graduated the ‘school of mortality’ on 12 February 2019. This earth is a better place for her having served so many and spent well her mortal life hereon.

Claudene was born on 27 January 1941, the eldest child of Irving Jacob and Hazel Elnora Ivie, in the picturesque mountain town of Rico, Colorado. As a child, the meager circumstances of her family (which were common in that area and time) necessitated frequent moves between mining camps in the mountain towns of southwestern Colorado, including Rico, Ouray, and Telluride; however, she enjoyed life with her family, whether living in a small house, a clapboard shanty, or a tent. She also enjoyed attendance at the small schools in these communities, where she excelled scholastically.

Following the early death of her cherished father in 1951, Claudene, her beloved brother Joe, and their bereaved mother Hazel moved closer to her family, who lived in the high plateau country near Dove Creek, Colorado. In this area, Hazel met and married Hughston C. Tewell, and they were blessed with two more children – Freda and Jim. As a teenager, Claudene treasured time spent with her ‘sisters’ (double-cousins), Charlene and Mona Myers. It was in Dove Creek where Claudene graduated high school in 1959 and was awarded a full collegiate scholarship.

That following summer, Claudene married her sweetheart – Leonard Joseph (Joe) Fabiano – who she met the previous fall. Their almost 60-year marriage began in a wedding chapel in Las

Vegas, Nevada, and was solemnized almost 10 years later in the Mesa Arizona Temple of the Church of Jesus Christ of Latter-Day Saints. While living in Silverton, Colorado in 1960, Claudene and Joe became acquainted with a friend who later introduced them to the aforementioned church. It was here they heartily embraced their newfound faith. Their faith in Jesus Christ has been the lodestar of their lives.

Claudene and Joe lived in several locations throughout the country, including stints in Colorado,

New Jersey, Louisiana, and New Mexico. In the course of their relocations, Claudene and Joe were blessed with eight children: Joe, Cory, Laurie, Christine, Greg, Mark, David, and Debra.

Long ago Claudene was qualified for ‘sainthood’ after giving birth to eight children (half of them being twins) in eight years. At one time, she was potty-training two children, while she also had three more in diapers…and that was in the days of cloth diapers! Claudene was both a firm and very loving mother who taught well her children, and by whom she is honored and loved.

Claudene is an extraordinary woman! She is survived by: her adoring husband, Joe; eight children and their spouses; thirty one grandchildren; ten great-grandchildren – and counting; her beloved siblings – Joe, Freda, and Jim; her best friends and dearly loved ‘sisters’ Charlene and Mona; and many, many more loved ones on all sides of the family. Many thanks to Rocky Mountain Hospice, and to her beloved friend and caretaker – Asena Puafisi.

The first viewing will be Sunday, 24 February (5-7pm) at Jenkins-Soffe Funeral Home (1007 South Jordan Parkway, South Jordan), and a final viewing at 9:30-10:30am at the aforementioned LDS Church.